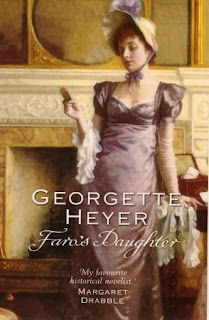 If you've never read Georgette Heyer, you should. Faro's Daughter is a very funny, sometimes mad-cap Georgian romance first published in 1941. Our heroine is not quite respectable and when a lordling falls in love with her, his family makes great efforts to distance them, most of which backfire. She is the most intelligent person on the page, save the hero, and watching her make good decisions while the waves of crazy crest around her is delightful. Of course, there is a happy ending.

My current favorite thing to listen to is the soundtrack from the movie Spider-Man: Into the Spiderverse. First, it's an amazing film in every sense and you don't need to know anything about Spider-Man to watch it. Somehow, when we watched it again a few weeks ago, I was reminded how much I liked the music. And it's available on Hoopla. I just have to renew it weekly on my library card. This is what I was doing with the Frozen II soundtrack a month ago. Slightly different genre of music. Slightly

(I wrote, in my head, an excellent blog post when I was in the shower last night. If someone could create a device to record all the amazing and useful things I think of while I'm in the shower, I would be eternally grateful. In the meantime, I will try to recreate my thoughts.)

So, this online schooling thing is not going well. Somehow, I thought I could be everything Miranda needed. (No, this is not a logical conclusion but I had early Covid enthusiasm that has obviously waned when it crashed into reality.) When she is at school, she has 9 teachers, a case manager, and a guidance counselor to help her and she was still barely passing her classes. Now, at home, with just me and her lukewarm attitude towards completing assignments, we are floundering. And I don't even know how far behind we are because I still have logged into Powerschool and counted, but we haven't even touched math in almost a month. I know she's doing work in most of the other classes.

Last weekend I had a serious, extended panicked mood about her schooling, so much that I was avoiding all the emails and phone calls from teachers and case managers for both kids. You know what, asking for help is hard. I hate to do it. And this is about me, not her.

I had to come to grips with the fact Miranda is not a straight A student years ago. She is not Sarah 2.0 (and for the record, I didn't have straight A's until they stopped grading me in handwriting and PE). Miranda is her own person and her AD/HD especially makes exams and essays a serious trial, so much so that we may have alternate grading in place for her in future. Which is perfectly acceptable according to her IEP; we just have to keep making those changes. She has no difficultly learning in her favorite subjects of history and language arts, she just needs help expressing it. Other subjects are more difficult but her teachers are the most reasonable, helpful people you could imagine. They don't want her to fail. And her case manager is amazingly compassionate. But I had to say I was failing and couldn't keep up. And that's hard.

Since then, I have been honest with her case manager and social studies teachers. I haven't figured out what to do with math yet, but I don't feel so hopeless now that I've admitted I'm not coping well. I can't manage both kids' schooling and the house and my own stuff and food and laundry, etc. And you know what? It's not possible for one person to do all that. It's not a reasonable request of any one person. And I wasn't doing it alone before. Miranda had her staff, Alex had his staff, Marshall was able to go in to the office and have the support of his co workers instead of trying to figure out everything from a desk in Miranda's bedroom. I had people I paid to clean my house once a month and I wasn't afraid to go to the grocery store. Not to mention my library! I was at the library twice a week to pick up or drop off books. And my mother and I shared a lot of the errands that we could that are much more difficult now. And I could go to church on Sunday morning and Wednesday morning and feel the support of my spiritual community.

Without all these necessary supports, I cannot expect myself to function well, much less at optimum. It's not reasonable. Ben Aaronovitch, an author I follow in Twitter, wrote last weekend that he had started coughing and was overwhelmed by such a sense of existential dread, the kind he hasn't felt since the end of the Cold War. And that's a great description. We don't know what's coming, how bad the virus will be, if we've already had the virus (Alex has a new fever as of yesterday because, of course), how much worse the US political world will get as people keep dying of Covid19 and the poorest of the world pay the debts of those of us who have more. I have more: a house, health care, access to testing and enough money to survive a hospitalization. Many people I know don't. And if you spend ten minutes on Google news, you'll find millions of others who don't either.

To quote a favorite Nalini Singh book, save the ones you can right now. If helping yourself is all you can do, do that. If you can help others, do that. Your local food pantry. Your favorite non profit. Your church. Your friend's church. Your parents, your family that isn't necessarily blood related. Try not to fall into thinking that your life or your way of life is more important than anyone else's. Jesus came to save all people. All of us.

My current favorite song from Spiderverse: